Stay in the loop with email updates.

Anyone who’s witnessed Big Sur’s majestic landscape – its seemingly endless stretch of mountainous coastline and waves crashing meditatively along the shore – shouldn’t be surprised to learn that it’s lured people in search of both physical and emotional healing for thousands of years, most notably the Esselen Indian tribe who used the mineral-rich hot springs for medicinal purposes. With contemporary culture’s growing interest in mindfulness, the appreciation of this place continues to run deep. In recent years, Big Sur has become decidedly more developed, with luxury hotels, bed and breakfasts, and celebrated eateries cropping up. But for those who traverse here for some kind of spiritual experience, there is one destination not to be missed. Before there was hip-hop yoga or meditation apps, there was Esalen, an institute founded in 1962 with the intention of promoting “human potentiality” by way of seminars on everything from massage to drug-induced mysticism.

Esalen was founded by Michael Murphy and Dick Price, two Stanford psychology graduates. According to Jeffrey J. Kripal’s text, “Esalen: America and the Religion of No Religion,” both men were particularly drawn to the teachings of Asian religions professor, Frederic Spiegelberg, in their pursuits of religious identity and meaning. Murphy’s family owned the property on which the institute was built, though the area itself had already become a respite for artists, musicians, and bohemians in the 1950s and early ’60s. In fact, Joan Baez and Henry Miller (who wrote extensively and famously about the area) were among those who called Big Sur home, and a young Hunter S. Thompson was a guard on the Murphy property prior to Esalen’s construction.

According to Kripal, after Esalen opened, the influential and famed creative community continued to flock there. George Harrison, Simon and Garfunkel, Allen Ginsburg, Robert Rauschenberg and John Denver all visited Esalen. Though the institute rose to popularity during the so-called Summer of Love, it proved more than just a hippie commune, with acclaimed intellectuals offering lectures on topics including sexuality and religious perspectives.

“Mad Men” fans might have detected similarities between Esalen and the coastal retreat that main character, Don Draper, visited in the series finale. Though the episode was not filmed there (production’s request was denied) and Esalen is never named, the concept of this place being a respite for anyone in search of peace, centering, and a greater understanding of oneself would have been pretty accurate in the early 1970s – and it still applies today. According to a recent New York Times piece, Esalen has become a desired destination of jaded, overworked Silicon Valley execs to unplug. Another story from beauty magazine Allure offers the author’s transformative firsthand experience of bonding with strangers in intimate workshops and communal, public nudity (Esalen’s infamous baths have a strict no-clothing policy). As the institute’s marketing director Lori Putnam explains, “Esalen continues to explore the edges of human potential through workshops and conferences that examine a wide range of subject matter, from creativity and relationships to meditation, spirituality, and nature.”

Though times have changed, Esalen maintains the mystique it always has. “Many speak of Esalen’s transformative impact,” Putnam says, “whether through its sacred and awe-inspiring land, the opportunity to reconnect with yourself or make meaningful connections with others.” Today many of us have only seen a limited view of the institute: beautifully shot Instagrams with nude bathers in the scenic public shower (some of them doing handstands) or rocks that spell out mantras like “Love More” – but it seems the most magical parts of Esalen remain a mystery to those who have yet to make their way inside. Perhaps that’s how it’s kept the integrity of its origins for more than half a century. 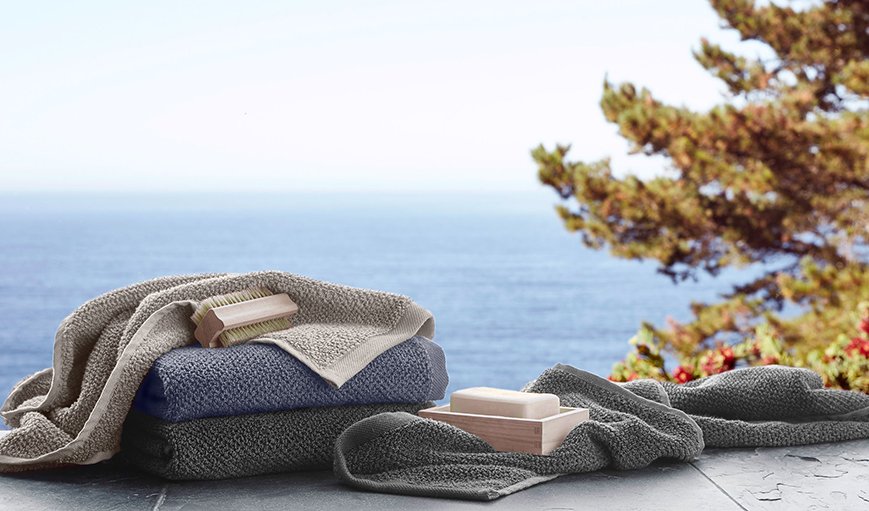 Inspired by Esalen’s history – and by the land of Big Sur, in general – we created a brand new bath collection that evokes the natural beauty and healing spirit of these iconic destinations.

7 Ways to Reuse Our Fabric Pouches

Be the first to know about new items, local events and more.