Stay in the loop with email updates.

A Beautiful Home in Chicago

PHOTOGRAPHS BY
Jasmine Pulley for Parachute

Architect Mollie Code and her husband Dave live in Chicago’s East Ukranian Village – a cozy neighborhood in the heart of the city that boasts small community-run parks, chickens and goats that live down the street and neighbors who still sit out on their stoops(!). The 19th century townhouse was given new life after Mollie and Dave transformed the property in a flip-turned-permanent home for the creative couple, their almost two-year-old daughter, Anna, and chocolate lab, Sable. Today the house is filled with timeless decor, modern fixtures and, of course, Parachute. Here’s a peek inside their Chicago haven... 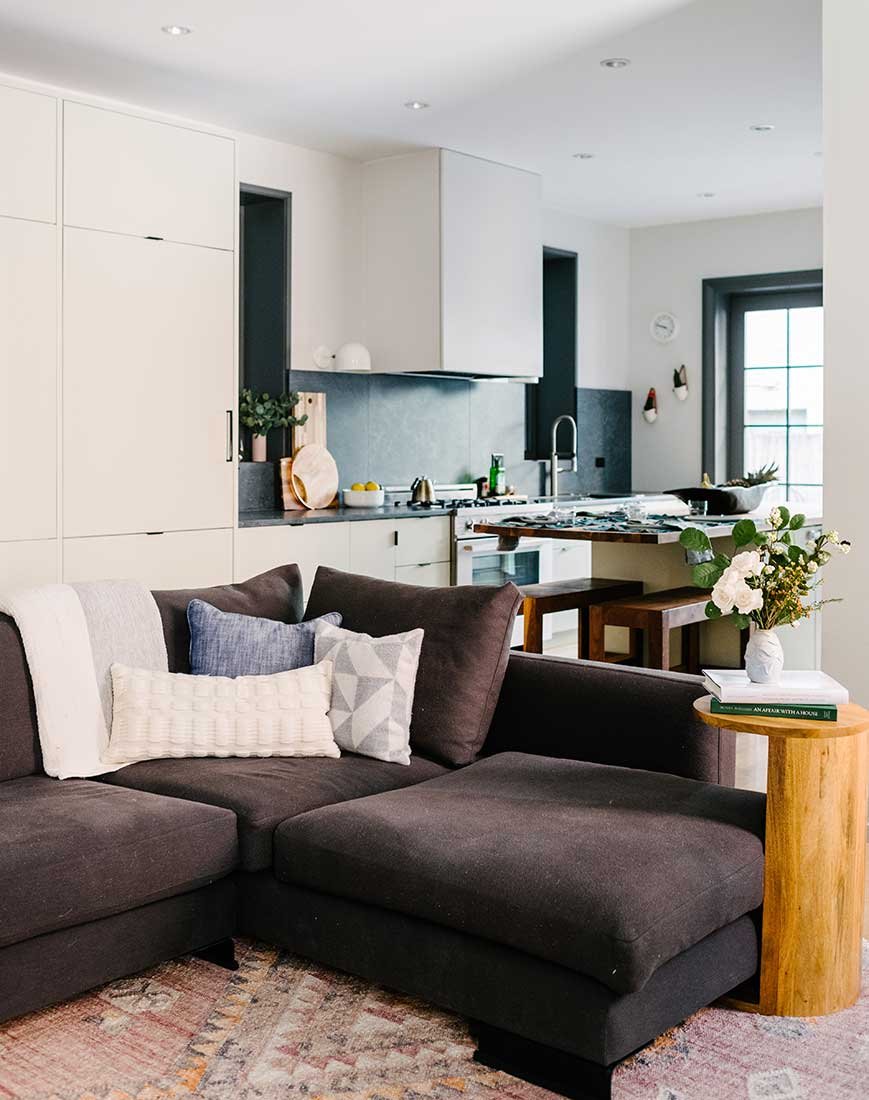 On renovating: When we bought the building it was four very small apartments and an unfinished attic. The purchase of the building coincided with when I left my job at a corporate architecture firm to pursue residential architecture and development and this was our first project. I had long admired Mike Shively and his team’s work and I called him to see if he'd be willing to mentor me in residential design. I worked part-time in his office in exchange for his time and expertise on this house that my husband and I developed. The collaboration with Mike and his team was one of my favorite parts of the project. 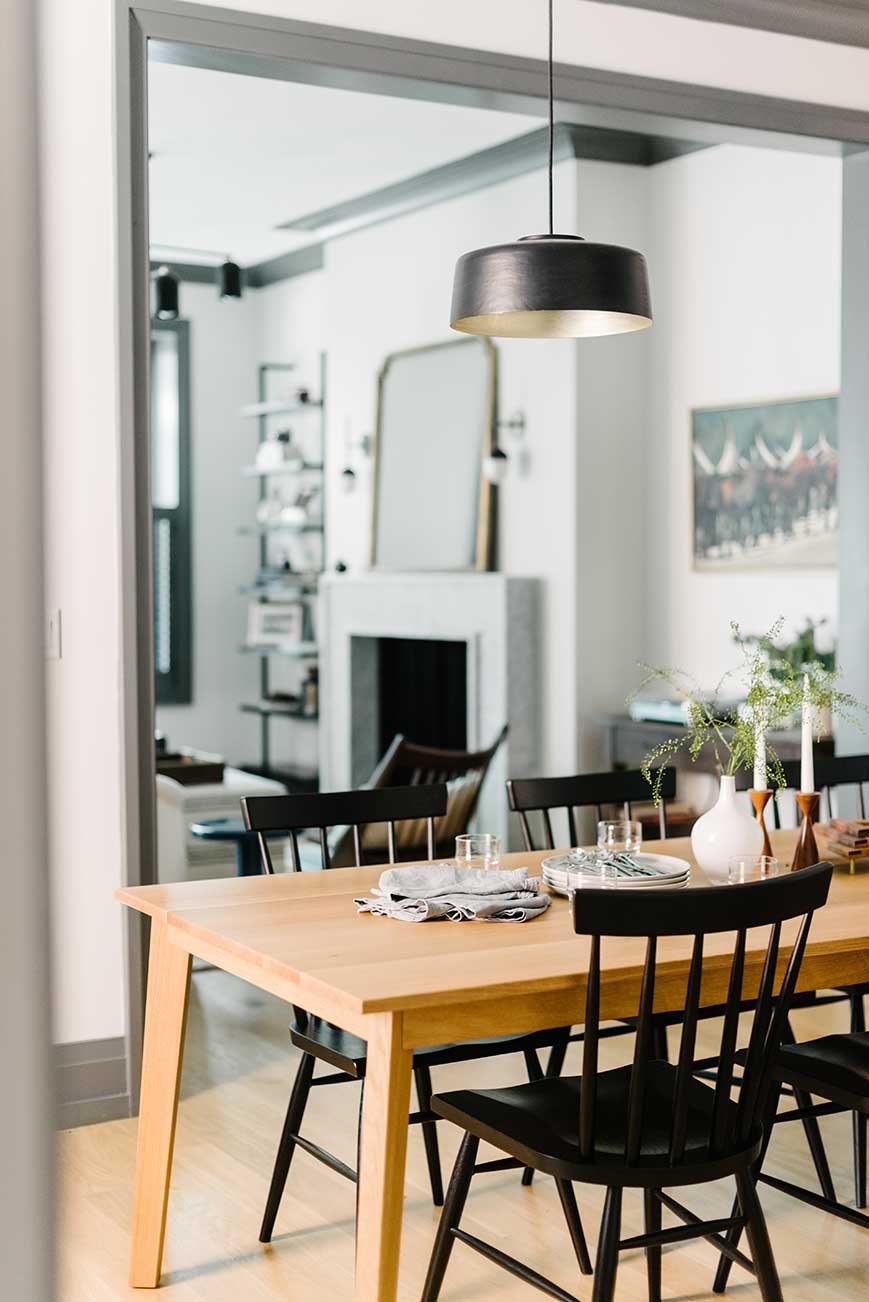 Onhome : As an architect, my style adapts to the context of the building I’m designing or renovating. For this home I would describe it as modern, warm and fresh. 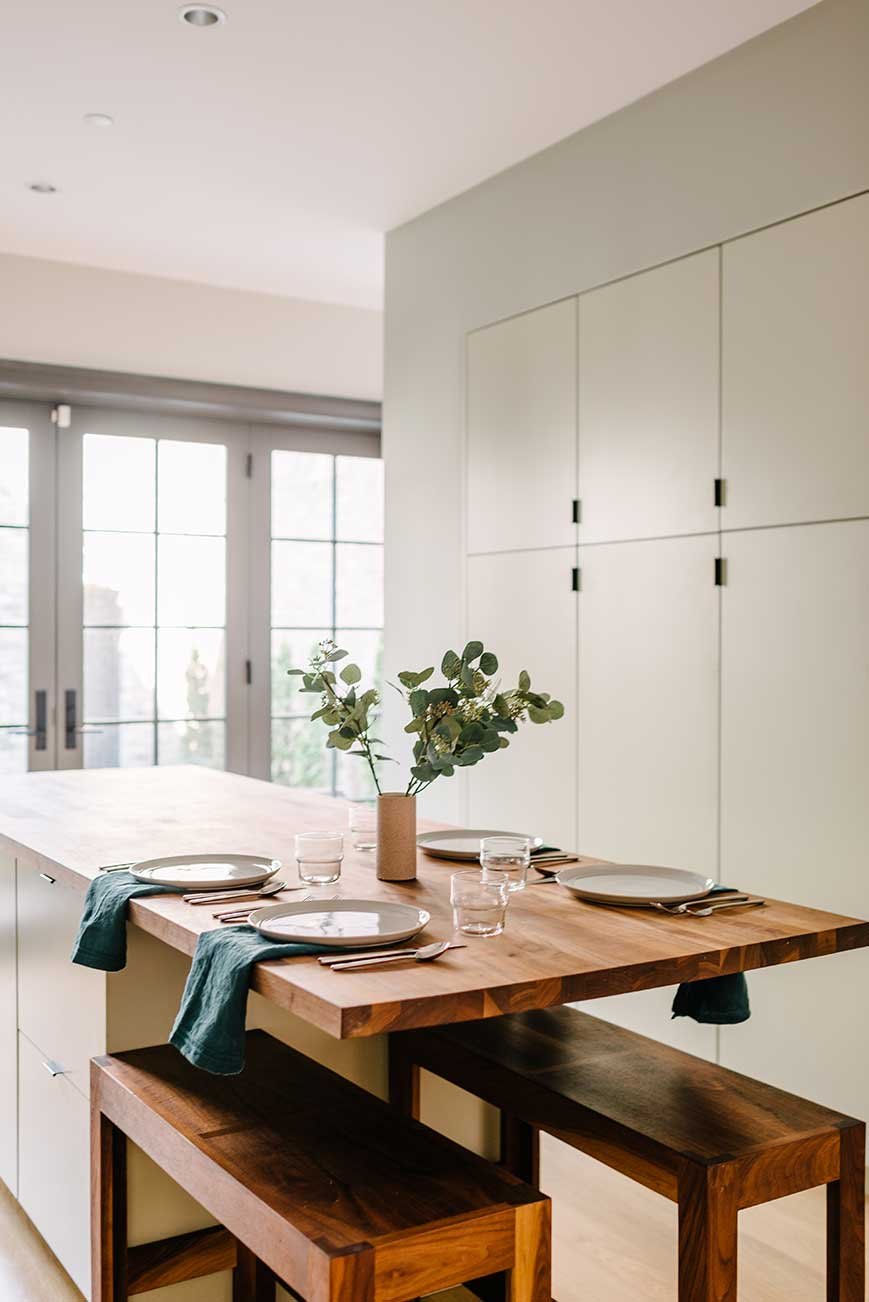 On your favorite part of the home: We love the kitchen/family room at the back of the house. In the summer, we open the large door to the backyard, and it feels like one big space. Having that indoor/outdoor experience in Chicago is such a luxury and one we really enjoy. 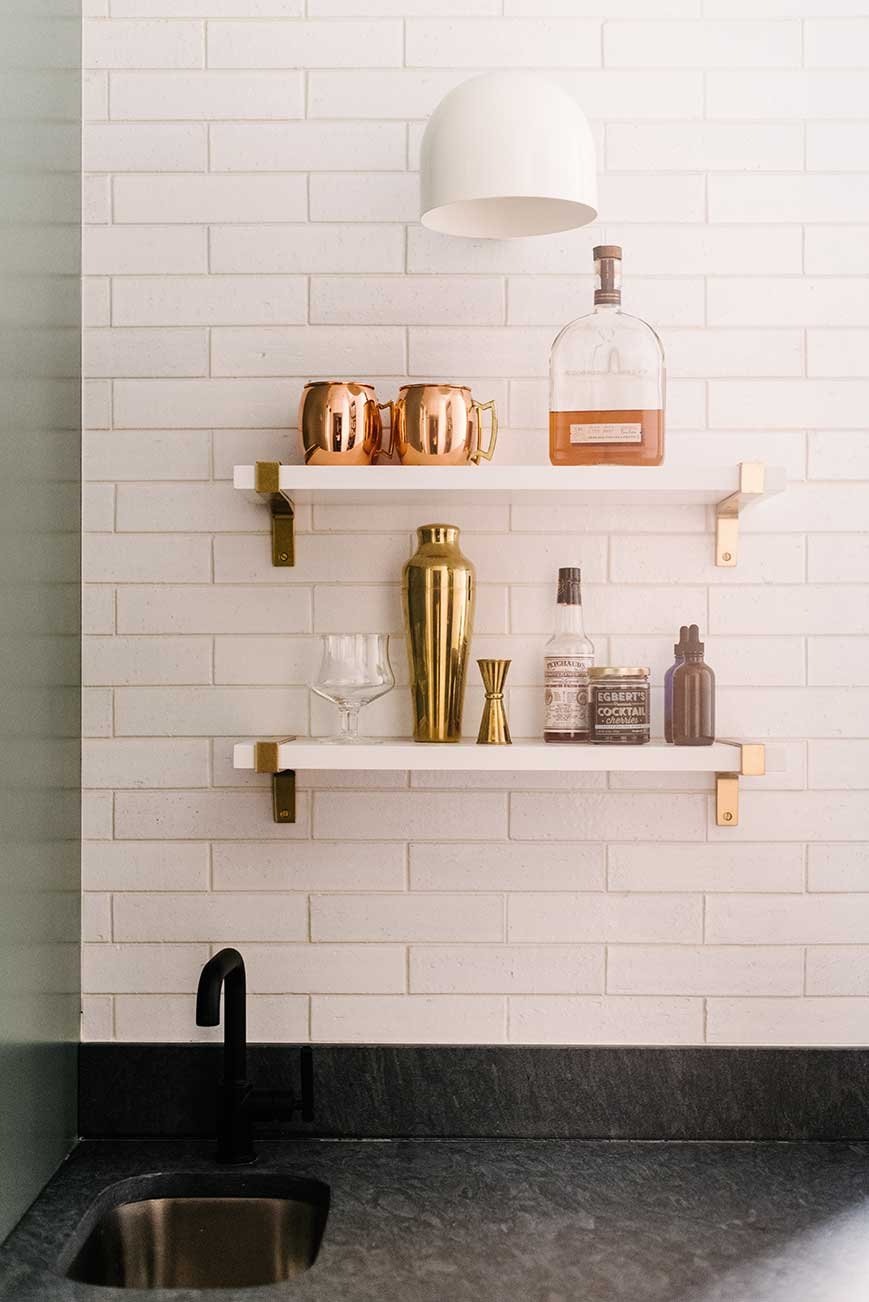 On perfecting the color scheme: Choosing color can be intimidating, but if you truly love it there is very little risk. To keep a cohesive look, I think it always helps to keep a very tight color palette. In our case, our palette is mostly gray, green, and accents of black and brass. This makes for a house that all works together, but still has diversity in styles. 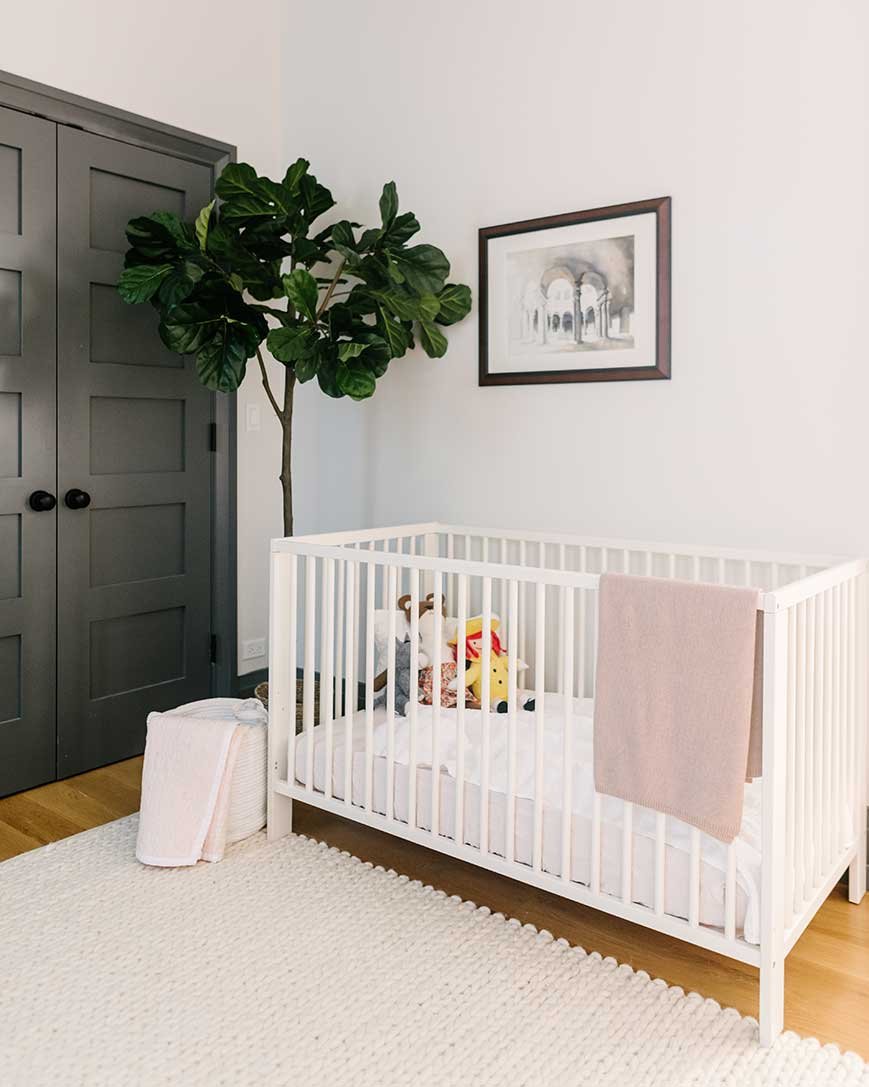 On entertaining (with littles): Dave loves to entertain and we unfortunately host less now that we’ve had our daughter. Now entertaining is very informal and usually involves a lot of little kids running around. This house is wonderful for this type of entertaining because we open up the large doors at the back and the family room, kitchen and backyard feel like one large space. We converted the unfinished attic into a guest room and bathroom and we host more overnight guests now. We love having a slightly more private area for guests. 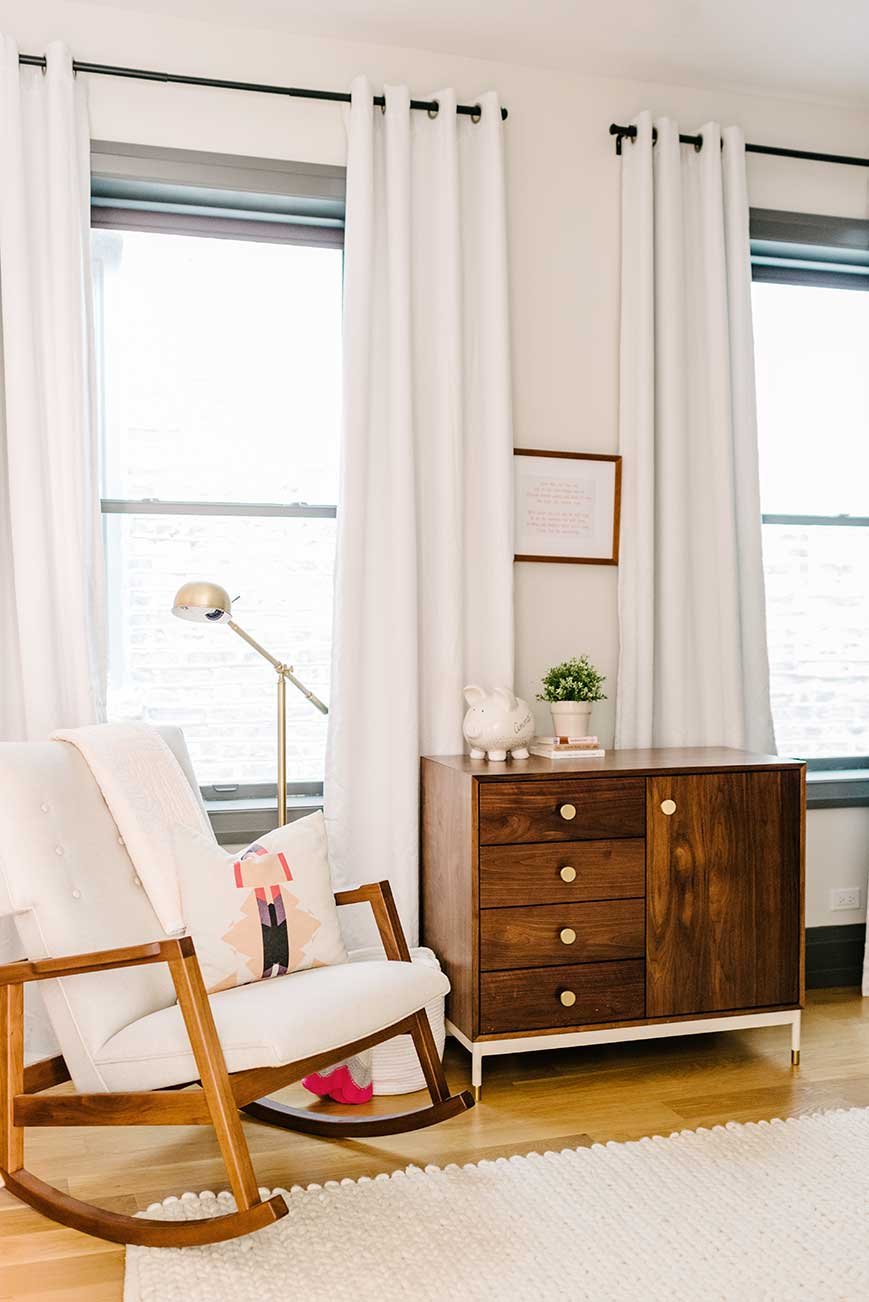 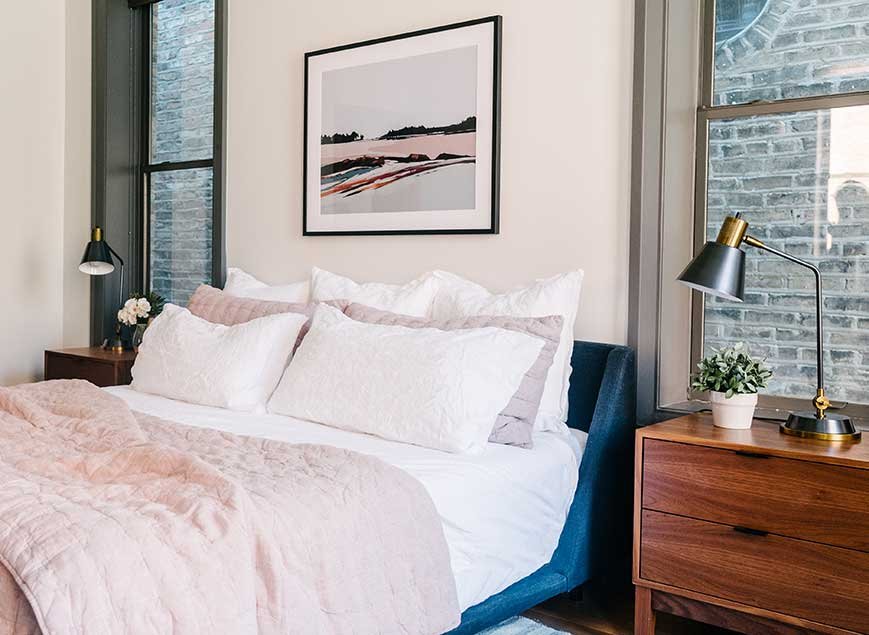 On starting fresh: When we moved into this house, we sold all our furniture in our previous condo, so we started from square one when we moved here. Even as an architect and lover of all things design, this was overwhelming. Dave and I decided to focus less on a particular decorating style but instead choose furniture and fixtures that we love. 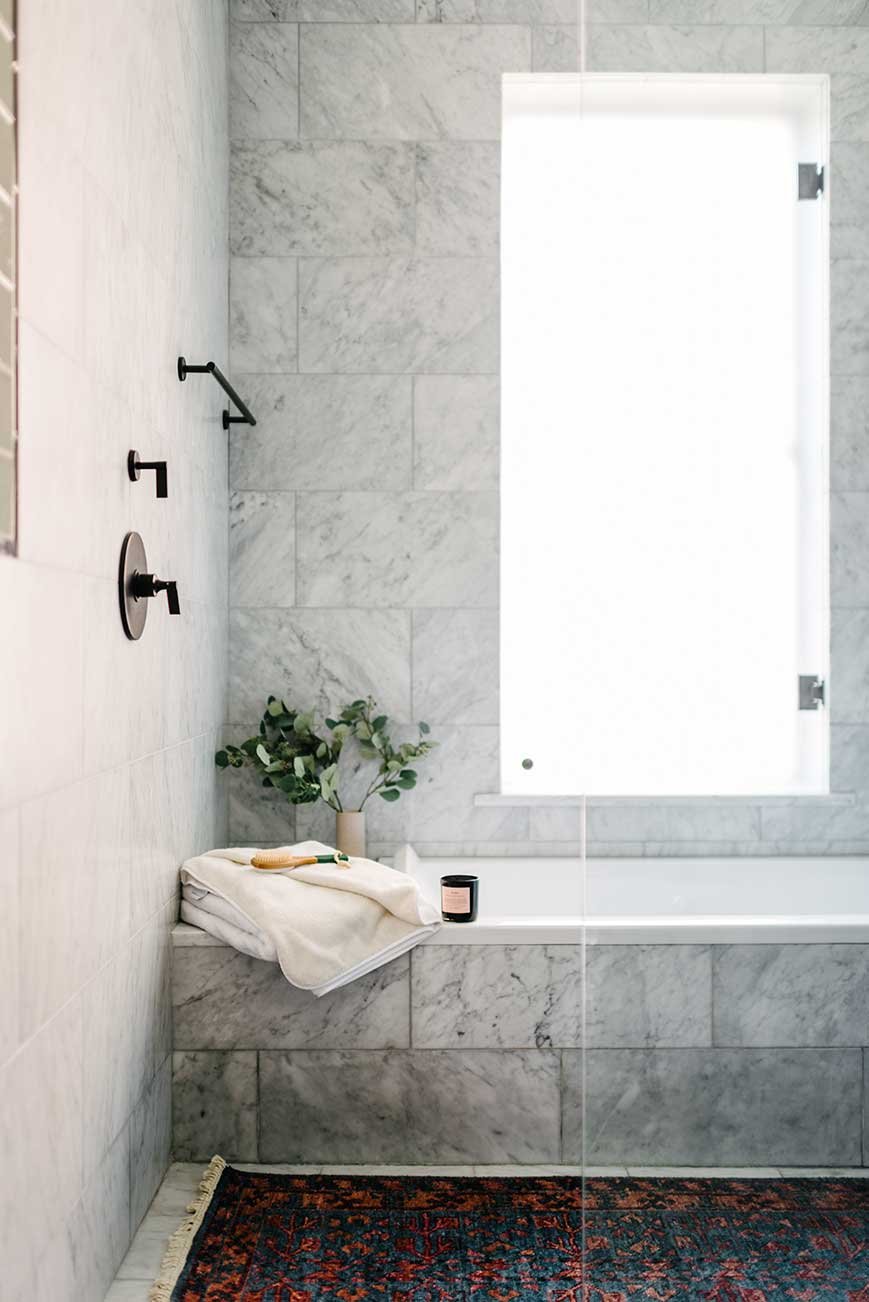 On creating more space: We took inspiration from a project of one of my favorite architects, Elizabeth Roberts of NYC. I love the mix of traditional and modern materials – the marble tile and walnut vanity combined with the matte black fixtures and pendant lights. The master bathroom also has a large walnut sliding door that opens directly into the master bedroom. It’s unusual to have the bathroom so visible, but the house is so narrow that opening it up makes the master feel much wider. 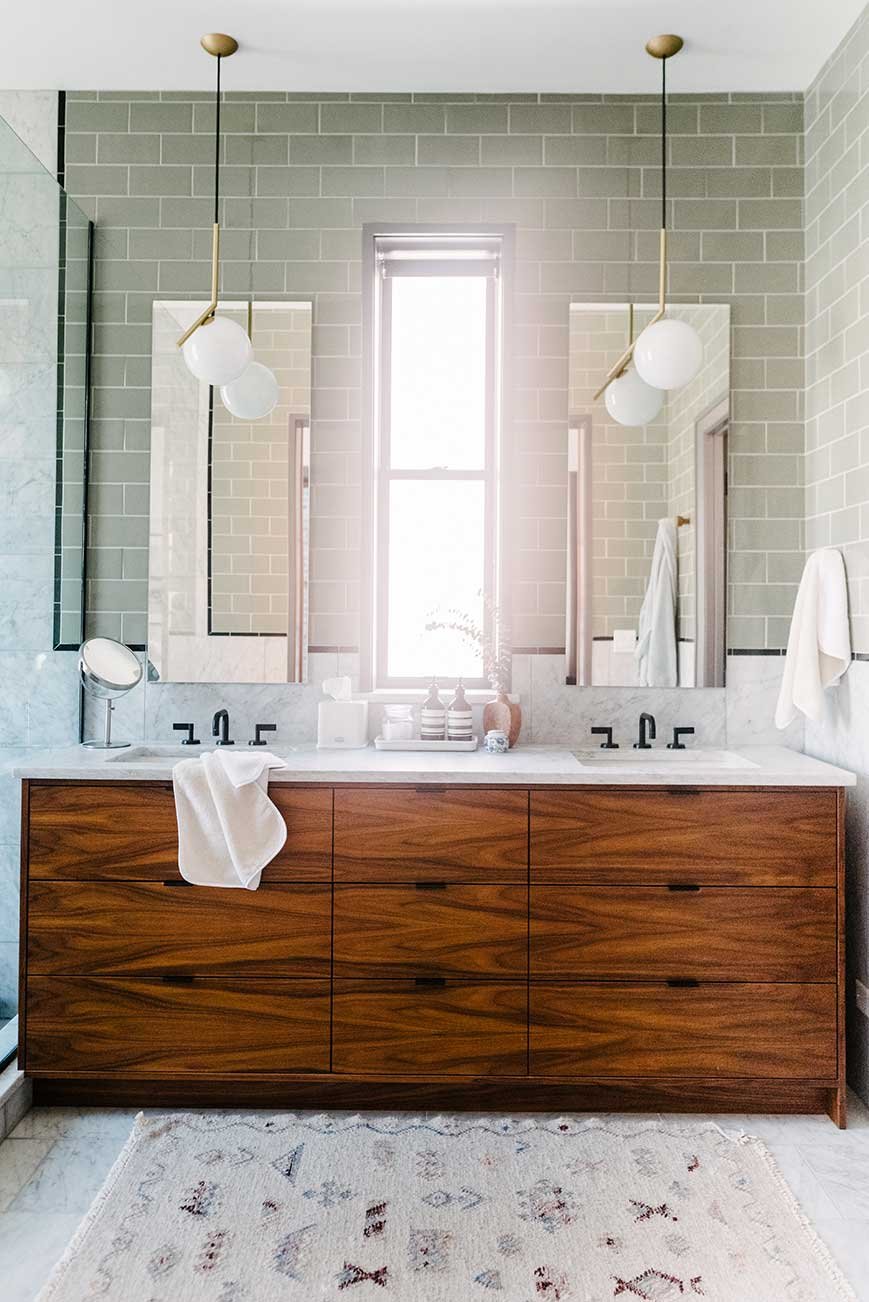 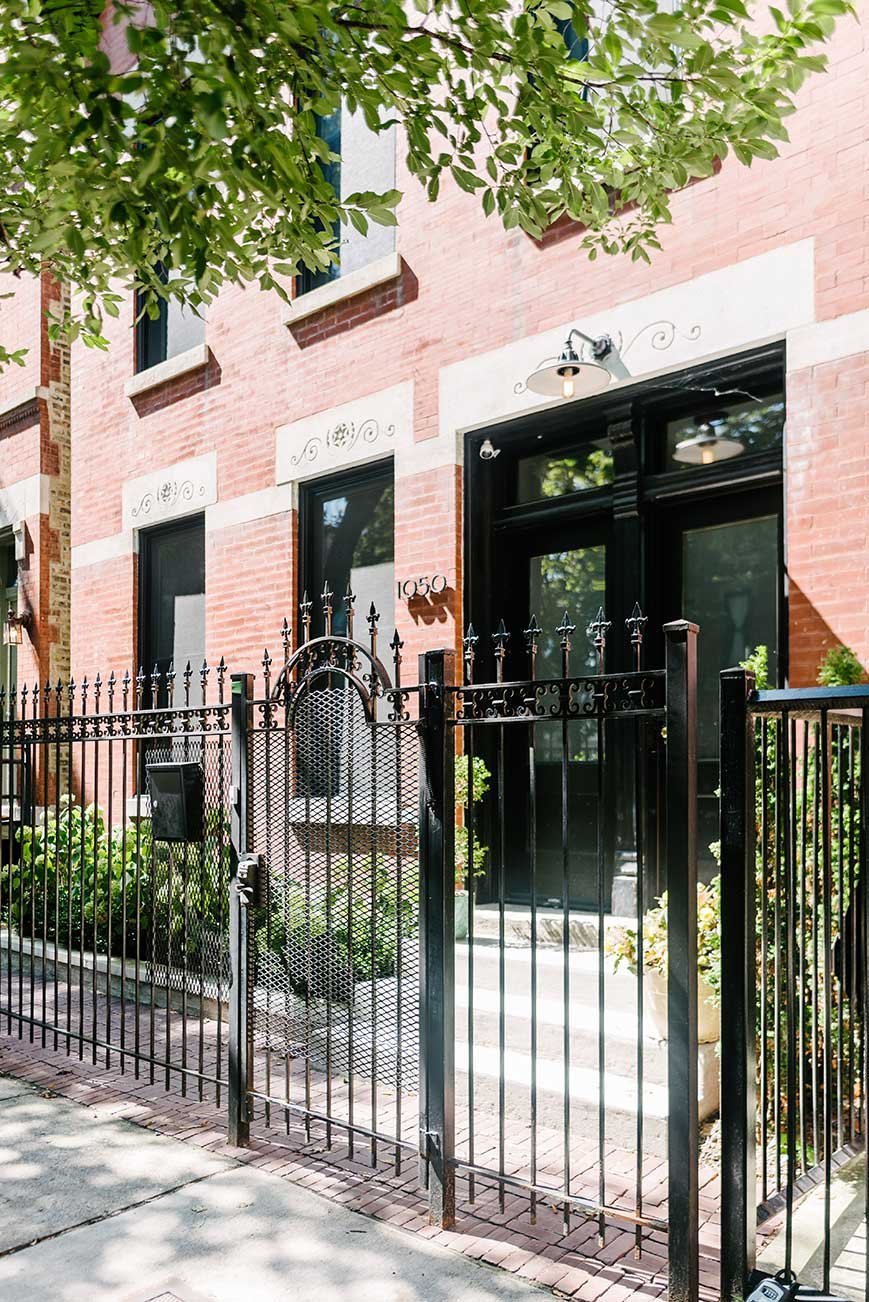 On celebrating the home's history: The exterior of the home is part of a landmark district designated by the City of Chicago. As a result, we couldn’t change the exterior significantly (which was fine by us since we already loved it!) and we also had to jump through a few more permitting hoops. The red brick is the original 19th century brick, we are so glad it has held up so well! The interior had been slowly updated over the last 150 years and sadly there was nothing historically significant left we could salvage. So, while the interior is almost entirely new, we did want to respect its past life while still breathing new life into it and making it a comfortable family home. It was important to us that the few original elements were retained and reused – most original window openings, the newel post at the front entry. 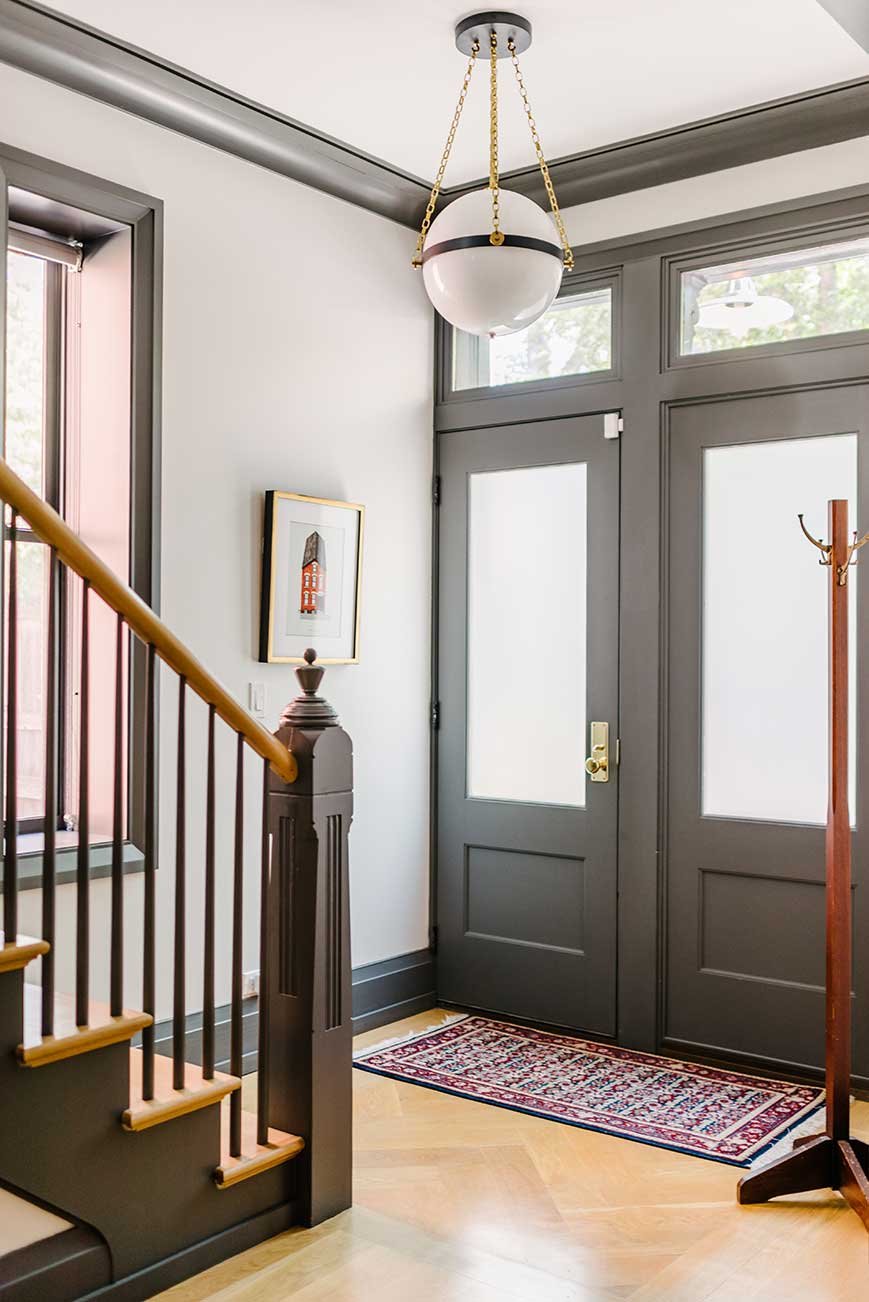 On raising a family in the city: I moved here after grad school and have been here for seven years. I love Chicago for the rich and diverse neighborhoods, the long history of amazing architecture, the ever-changing restaurant scene, and the many museums and activities for our daughter. Chicago has more than its fair share of struggles and challenges, but I love that community we have here, that we are driving distance to most of our loved ones, and that I met Dave here.

On community: The house is in East Ukrainian Village in Chicago. It’s such a tiny neighborhood, we had never even heard of it until we bought this place. It’s in between three of the fastest growing neighborhoods in Chicago – Ukrainian Village, Wicker Park, and West Town – and we have noticed significant (mostly positive) changes in the neighborhood in the last two years. We love it for its community feel – there are small neighborhood-run parks, chickens and goats live down the street, and – my personal favorite – our neighbors sit on their front stoops. Our favorite neighborhood places to eat are probably Dove’s Luncheonette and Big Star. 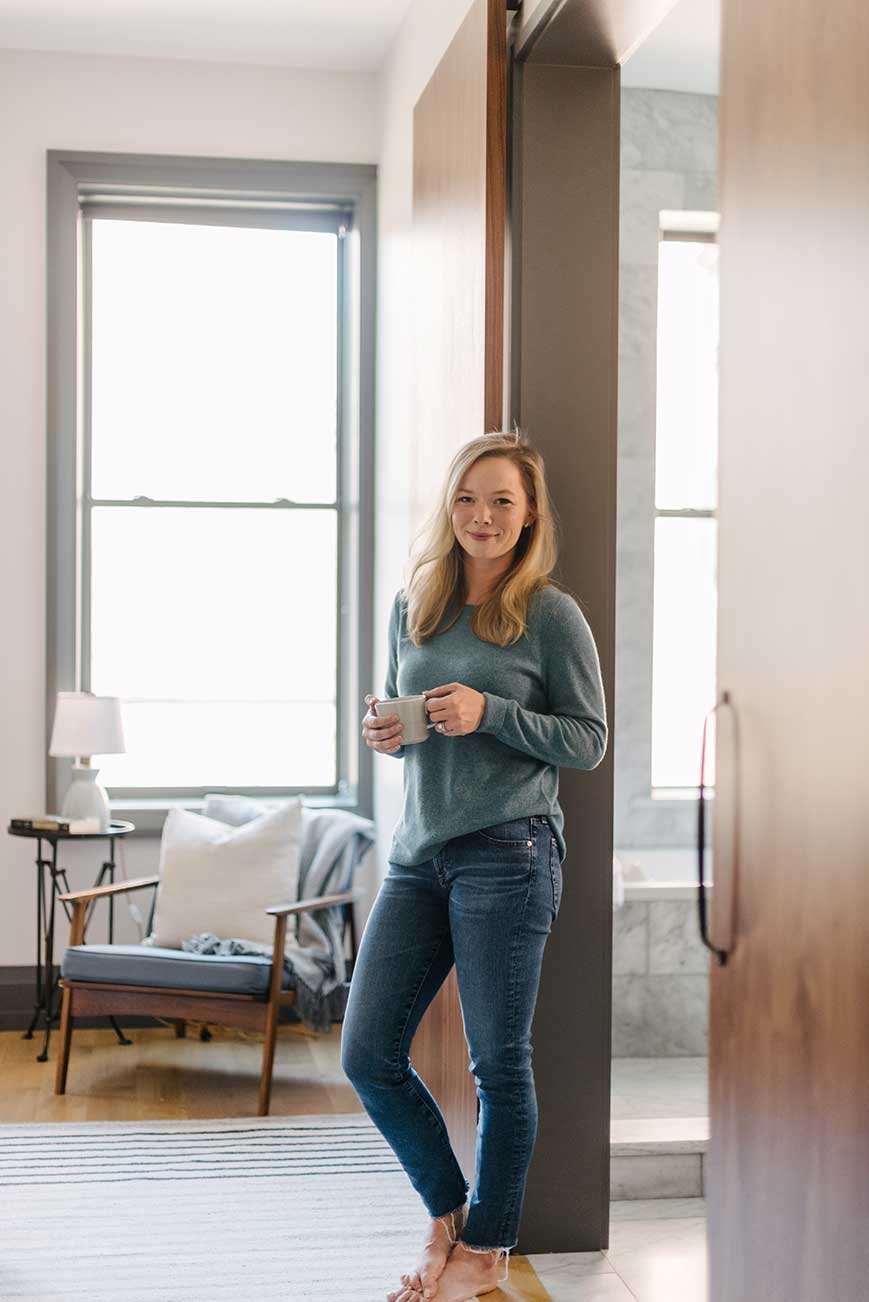 Thank you so much, Mollie!

A Connecticut Craftsman That Lets Outside In

The Most Popular #MyParachuteHomes of July

Be the first to know about new items, local events and more.